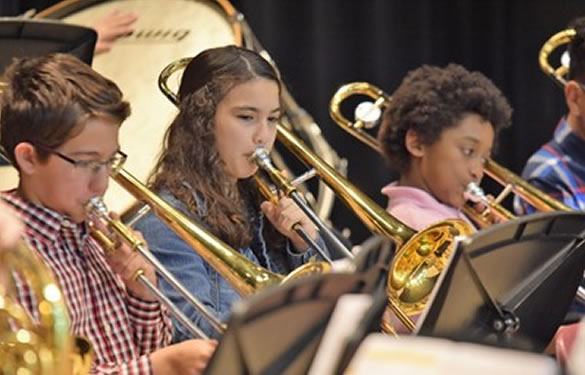 “Music,” wrote Plato, “is a more potent instrument than any other for education.” What wise elders intrinsically knew 25 centuries ago has by now been thoroughly documented by modern science. The benefits of playing a musical instrument on child development are as wide reaching as they are profound.

But let’s go beyond the language of science and measurement for a moment. Place a picture in your head: one in which your child not only has an instrument in his or her hands but is also surrounded by other kids playing music. Children and music are a natural fit; we can feel this in ways beyond knowing. Music makes a child’s life better, and music-making with others makes the sometimes-awkward days of childhood so much less solitary.

The hours a child spends practicing alone build a lot of strengths, including self-discipline, but the time spent among other children working together towards producing beautiful sound help a youngster find his or her place in the world. Today let’s look at a few of the proven benefits of playing an instrument in a school band or orchestra.

Archeologists have unearthed music instruments dating back 35,000 years, indicating that even in humanity’s hunter and gatherer days, people played music in groups. Songs are part of our social fabric; in music, we celebrate, remember, and perhaps more than anything, come together. Put simply, music connects us.

A study at Freie University Berlin showed how music as a social activity builds brain circuits involved in empathy, trust, and cooperation. “When playing music in a group, individuals have contact with other individuals, engage in social cognition, participate in co-pathy (the social function of empathy), communicate, coordinate their actions, and cooperate with each other, leading to increased social cohesion,” the study concluded. “Music making is special in that it can engage all of these social functions effortlessly and simultaneously.”

With more focus centered on social-emotional learning (SEL), school band can easily be seen as an integral part of education and human development which can address various forms of inequity. It alsoempower young people and adults to co-create thriving schools and contribute to safe, healthy and just communities.

When kids connect in this way playing in a school band or orchestra, it creates a blueprint for connecting with others in other areas of life. Success in society later in life will depend on the ability to form such connections.

A child is born knowing how to play. A toddler can and does make a toy out of almost anything. But as any parent knows, it’s when your baby starts to learn how to play with others that learning increases by leaps and bounds. School is a first step towards working within larger social organization, and music eases such socialization and seamlessly shows how to work with others towards a common goal.

Playing in a band, like team sports, gives kids challenges that they overcome together while also developing the individual initiative of choosing an instrument, participating in an environment with social complexities, and succeeding through practice and repetition. By playing in a group, a child learns how to both play both for him or herself as well as for others.

Music is exacting. It’s no wonder that kids who play music tend to do better in math and science — there is little room for error in playing a piece of music correctly. Playing in a school band or orchestra takes this challenge and increases it exponentially because it puts a child in performance mode.

This is not just school concerts, but every day in the band room: to play any song with and for others invites a child into a higher realm of discipline, where costs and rewards are immediate. Then there is the matter of how through music a child connects with an entire culture of music performance — whether by learning John Philip Sousa in marching band, Grainger in concert band, Duke Ellington in jazz band, a young musician accesses a realm of higher human achievement.

Every child benefits from learning to play a musical instrument. School music programs are a great way to introduce your child to the joys of playing music in an environment where they will receive the support, encouragement, and connection they need. When considering how today’s education environment would look without school band, it’s easy to understand it’s vital role in our children’s educational pursuits.