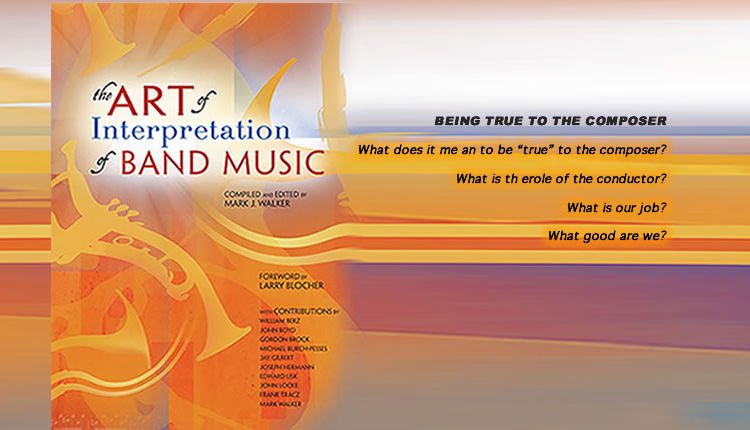 BEING TRUE TO THE INTENTIONS OF THE COMPOSER

What does it mean to be “true” to the intentions of the composer? Is it enough to simply follow the tempo, the dynamic markings, and the stylistic directions? Does doing so yield an inspired, musical performance? Probably not. What then is the role of the conductor? What is our job? What good are we?

To be sure, our job is complex. One true task of the conductor is to translate the symbolic language of the written score into an aural realization that bears a unique and personal artistic imprint. The reality is, in the opinion of this author, that while conductors have many freedoms and a nearly unlimited set of tools at their disposal in realizing and expressing their artistic vision, they must also be informed and disciplined by the conventions and historical traditions of their craft.

To begin, let’s consider for a moment the following statement from Guido Gatti  and Henry Furst, writing in Musical America in 1931:

It is logical to conclude that since there may be infinite interpretations of Beethoven (theoretically, at least, considering the number of artists who have performed, are performing, or will perform his music), what we possess, even in the autograph manuscript, is really not the work of art of the German master, but is something which in a certain sense is already a reproduction: which is, from one point of view (on a theoretical plane) a re-creation, an interpretation of the author at the very instant when he was communicating his intuitive expression and was setting it down physically; and from the other point of view an imperfect interpretation because musical notation is inadequate and the musical idea, in its multiplicity and its simultaneity, can only be approximated on paper (more roughly than is generally believed). This conclusion may seem paradoxical, but, strictly speaking, it is inevitable: what has come down to us of a sonata by Beethoven is not the artistic reality created by Beethoven but a potentiality, and therefore it does not exist outside of the execution, which is the sole concrete artistic fact. Its only reality lies in the interpreter’s reproduction, in those sounds which, through our sense of hearing, are able to excite our sensibility and to speak to our souls.’

The sentiment expressed above by Mr. Gatti and Mr. Furst is not unique in the literature of musical interpretation. The simple fact is that any piece of music, perhaps with exception of pre-recorded electronic music, reaches the listener only after passing through the hands of the performer, the conductor, or both. A musical score sitting on the shelf certainly has no life of its own. Music, by and large, only comes to life through performance. The degree to which the performance coincides with the intentions and aspirations of the composer is anyone’s guess. Composers write ensemble pieces and we, as conductors, give them life.

Conductors need to know, for example, what the mainstream of informed thinking and practice might be for a-given work before deciding to go “off the reservation””(so to speak) in terms of tempo, style, or in points of emphasis. Even that aspect can be elusive. Could there be any more divergence of opinion among the myriad of conductors who have interpreted Percy Grainger’s beloved Lincolnshire Posy? Consider for a moment the fifth movement, “Lord Melbourne: War Song.” Yes, it is “free time” at the beginning in the fanfare-like passages. Have you not heard this at every imaginable tempo? Have you not heard this range in emotion from what might be best described as ferocious and angry to majestic and nearly chorale-like? Have you not heard those opening passages contain accelerando from one conductor and ritardando from another in the very same place? Well, if you haven’t, you’ve simply not attended enough concerts or listened to enough recordings. So who is right? What is the agreed-upon convention for the opening of “Lord Melbourne”? And who is to say what is right and what is wrong or, at least, less right?

Is it not enough for one to hear a recording of a very fine ensemble led by a respected conductor and know that since the ensemble is mature and refined the interpretation itself must also be truly golden? Well, no (sorry), it is not enough. All too often band conductors make the mistake of assuming that any band that can successfully perform all of the notes and rhythms correctly and, more or less, in tune and with mature tones must also be offering up superb interpretations at the same time. In fact, too many band conductors spend so much of their time attempting to reach that promised land of “technical perfection” that the musical vision or expressive import of what is happening is scarcely considered.

To make the question even more complicated, how is one to know what Percy Grainger himself wanted to hear in the fifth movement of Lincolnshire Posy? After all, this author has only known one person who performed Lincolnshire Posy under the baton of Percy Grainger. Even then, when one hears a work conducted by the composer, does that alone constitute what might be called “the” interpretation? Should everyone then take special care to simply imitate that performance in exacting detail? Is this the answer everyone is seeking? “McBeth Conducts McBeth”-end of story. There’s my interpretation. Well, in the opinion of this author, “Not so fast, my friend.”

Here are some well-stated thoughts from the great orchestra conductor Eugene Ormandy in 1942 along these very lines:

Yet music for the performer has always been dependent upon the performer. Never too much in the background, his position in the present organization of concert-giving is so emphasized that he often overshadows the composer himself. Yet who is to say him nay? What, besides inborn instinct and good taste, is to set the limits beyond which he may not go? Tradition, handed down from one generation of musicians to another, is often distorted in passage; yet how else after the composer’s death, are his wishes to be translated into sound? Since a composer is often notoriously not his own best interpreter, by what standard is one reading of his work better than another?

Yes, it is important to be true to the intentions of the composer, to the use of notation and symbols provided by the composer, and to be knowledgeable about the mainstream of interpretations about a given work. And when presented with a performance, live or recorded, that was conducted by the composer, one might perhaps give some extra credence to the tempo, style, or expression found in the performance. But the fact remains that the final decision about the artistic whole lies in the conductor’s own hands. While imitation may be a sincere form of flattery, it goes only so far when it comes to the decision-making process about how you would like to convey the piece you are conducting to the listeners. Inevitably, those choices and decisions will be up to you. Perhaps, at least partially, it is why you became a conductor in the first place-so you could make such decisions.

Ready for takeoff! Getting your trip off the ground