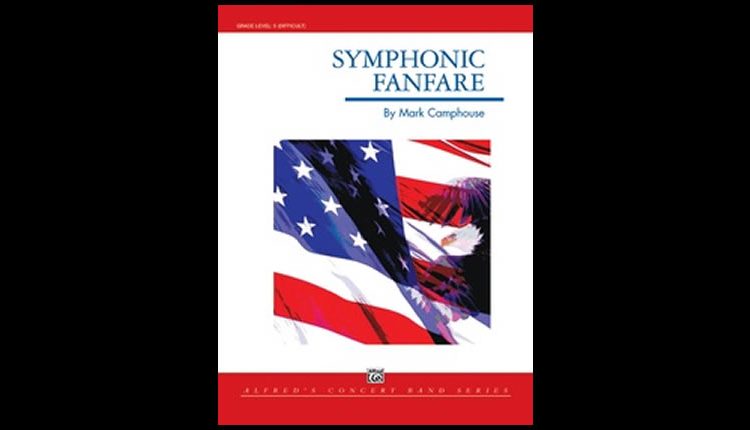 Symphonic Fanfare makes an outstanding concert opening fanfare. It begins with a dramatic motive played by the first trumpet in octaves with the first trombone. This motive crescendos to a short tutti chord followed by a fermata. This attention-getting device occurs twice before the piece accelerates and builds to a maestoso, stating the main theme by the full band. The sweeping crescendo is aided by sixteenth and thirty second notes played in octaves by the upper woodwinds and saxes.

This energetic selection’s sound resembles Copland through its chord selection and syncopation. The composer cleverly employs the use of allargando, molto allargando, poco meno mosso, or molto rallantando just prior to an A Tempo section. This has the effect of stalling the following phrase just enough to make it sound more convincing and refreshing.

An expansive and lyrical middle section contrasts with the majestic and lively outer sections. This section is marked Arioso (con moto) and the meter shifts from 4/4 to 3/4. A very effective unison line is stated by the first clarinets and French horns. This legato line is accompanied by soft, syncopated chords played by the trombones, second and third clarinets, and tenor and baritone saxophones.

Following this section, the main theme is stated again by the high woodwinds, first trumpet and first trombone in octaves, but this time it is a half-step higher. This happens on top of a very strong diatonic bass line that proceeds downward, while the unison horns play a majestic countermine. After four measures, Camphouse brings back the lyrical theme, again in 3/4 meter for four measures. The piece build to a crescendo to a fortissimo march section.

The first maestoso section returns bringing back the main theme. This theme is again colored by active chromatic movement, in thirty second notes, in the upper woodwinds.

The rhythmic complexity will keep all sections busy.The work generates enormous energy and excitement as it approaches the hard driven and dramatic ending.

Symphonic Fanfare requires seven percussionists, utilizing the full complement of percussion instruments. They play a prominent role in connecting phrases and entire sections in the piece.

The French horns have particularly interesting but challenging parts. The first horn is asked to play up to an A-flat above the staff (written). Some of the leaps and quick rhythms (sixteenth and thirty second notes) requires excellent horn players. The horns play throughout most of the composition – they are tacet for only two measures.

The lyrical French horn lines are usually doubled by unison clarinets or by the alto saxophones.

The high woodwind parts are very challenging in their demand for agility and dexterity, but lie easily under the keys, and should be a fine workout for the woodwind section of a very good band.

I recommend this piece for its use of harmonic and melodic contrasts, its inclusion of musical tempo changes, and for the very appealing rhythmic challenges.

The scoring and frequent tempo changes make this piece a superior learning experience.