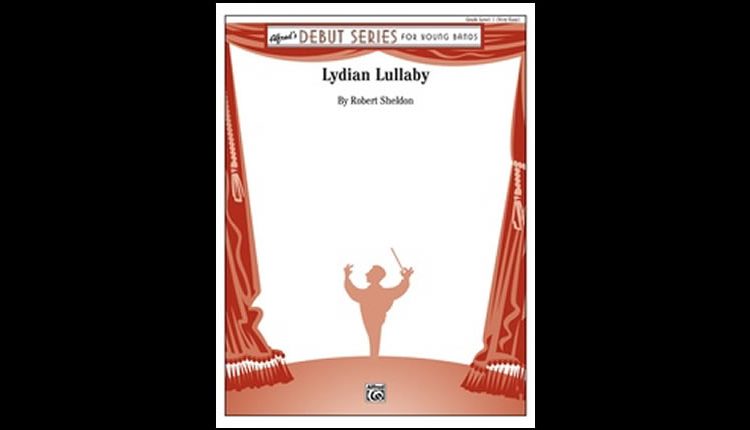 Enhance your band program with this selection which provides delicate moments of contrast.

Sheldon’s creatively orchestrated piece is an excellent way to introduce students to modal music while teaching expression and tone color.

The tempo is quarter note mm=72 throughout the piece.

The piece begins with a sustained four-measure introduction in 3/4 time and leads to a theme stated by the clarinets in thirds, accompanied by orchestra bells, wind chimes and timpani. A tranquil mood is established early in the piece.

The dynamics are very effectively handled throughout this work for band.

The clarinets begin with a segment of the theme before announcing the theme in measure nine. (This is a wonderful compositional technique espoused by Haydn and used widely afterwards). The chord progressions are typically whole step progressions alternating between Eb major and F major.

At measure 13, the trumpets take over the theme with the flute and oboe, playing in octaves, while the flute plays the theme an octave higher. The trumpets are voiced mostly in parallel thirds. Several inner moving lines come forth to add interest to the composition.

At measure 25, the second theme is introduced with unison trumpets, while horns and alto saxophones paint a moving contrapuntal background.

At measure 33, the flutes and clarinets take over the theme, with the clarinets playing in their medium to low range. An effective contrast in sound is achieved as the woodwinds, orchestra bells and wind chimes speak quietly. After four measures, the alto saxophones (written in parallel thirds), lead the melody into a full ensemble passage beginning in measure 41.

Measure 55 is similar to the introduction in mood and musical effect.

The full ensemble plays forte for eight measures. At measure 49, the sound thins considerably, with sustained chords in the brass and low woodwinds, combined with shadows of dynamics to conclude the piece.

Lydian Lullaby is a tender expression and an excellent composition for teaching dynamics, balance of tone, and phrasing. The contrast in scoring makes this piece a first-rate choice for programming.

The Best Of Easy Jazz