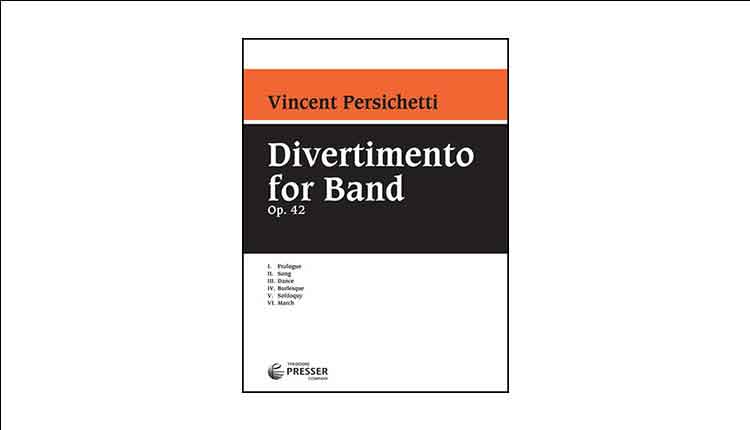 Philadelphia born Vincent Persichetti (1915-1987) established himself as a leading figure in contemporary music. He was a virtuoso keyboard performer, scholar, author, and energetic teacher. To his credit are more that eighty compositions, including major works in almost every genre.

Each of the six movements of the Divertimento covers completely different moods and styles. This work has a beautiful balance from the agitated woodwind figures and aggressive brass polychords in the first and last movements to the delicate and lyrical inner movements.

The Prologue is driving and electric, with the woodwinds getting a workout. Punctuated chords in the brass with antiphonal woodwinds continue until the cornets and trumpets play in imitation, followed by divided trombones. Meanwhile the woodwinds are playing fragments of the theme. The antiphonal writing continues until the end, where a forceful ff ending occurs.

The Song demonstrates Persichetti’s lyricism as he weaves two simple and attractive melodies together. The clarinets and saxophones play weaving eighty notes beneath a theme in the horn. A beautiful trumpet solo ensues, that is a variation of the previous horn line. There are lots of weaving lines in the woodwinds and horns. The movement ends quietly as horns, baritone horn, and solo Tuba fade.

The music does Dance in the sprightly and animated third movement. The theme is tossed about by the woodwinds around a trumpet solo passage with no change in tempo, but a complete change in the texture. The clarinets are challenged in articulation of fast-moving eighth notes combined with rhythmic chords in the horns. Antiphonal writing again dominates as the theme is tossed from section to section. In this movement, the demands are on the high woodwinds to phrase and articulate very quick passages with precision and flare. A humorous and whimsical ending completes the movement.

The Burlesque brings forth heavy, rhythmic scoring at a moderate tempo. The basses carry the theme against offbeat punctuations in the horns and low woodwinds. The theme suddenly jumps up a perfect fifth in the basses before the sprightly woodwinds take over above sustained horns. The theme is fragmented in a transition section leading a lightly rhythmic effect, again with the solo line in the basses. However, this time the trumpets, in unison, echo the bass two octaves higher. This antiphonal conversation continues up to a marvelous build up to the them stated by the ensemble. Fragmentation of the theme occurs again, and builds to a roaring ending.

The beauty of the Soliloquy belongs to the solo cornet, playing above sustained woodwinds and horns. Imitation of the theme occurs at the end of most phrases. This adds cohesion to the movement. A passage for solo flute occurs just prior to the p ending that both retards and fades.

The percussion entrance of the March returns the pace to that of the original opening as the brass and woodwind choirs work over the punctuation and timber of the percussion section. This movement is slightly faster than the first movement, but retains the energetic edge of the first movement. There is a long passage of woodwind trills that must be played evenly to be effective. The work ends with a powerful ending.

This piece is highly recommend for very mature high school and college level.