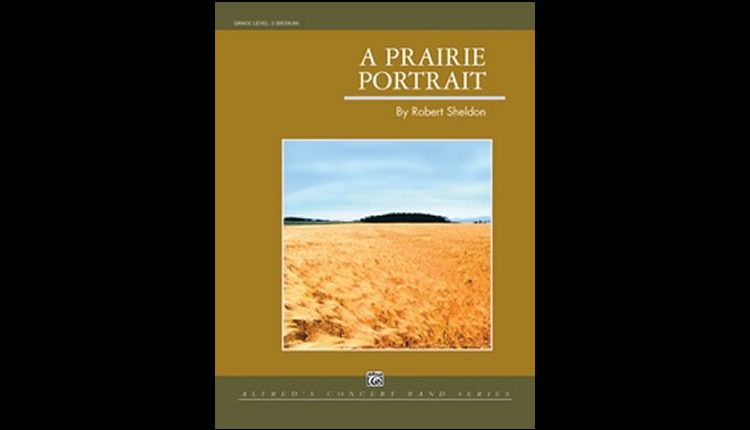 The following two paragraphs are taken from the program notes contained in the front of the conductor’s score for this composition.

This work was inspired by the poetry of Carl Sandburg, a native of Illinois. His poem, “Prairie” is one of the poems in his collection entitled Cornhuskers.

This is a beautiful, lyrical piece of music. The work convincingly depicts the pioneer spirit of youthful and optimistic energy as it shines through the opening of the work. The lyrical section that follows represents the poet’s “hankering” for another beautiful day and night on the prairie, and evokes the warm feeling of love and security we all feel about the place we call “home”.

The opening section of A Prairie Portrait is marked Allegro Moderato at a quarter note equals 120.The brass bring forth a heroic motive while the high woodwinds busily play a background consisting of moving eighth and sixteenth notes. The saxophones and horns imitate the opening motive two measures after it is introduced.

Legato French horn parts are doubled by the alto saxophones, as this section leads to a slower Andante section, when the key changes from E-flat major to A-flat major. Notice that the composer uses many major chords with an added ninth (or second) for color, along with pedal points in the low instruments. One surely gets the feel of wide open spaces of the West in this composition. The composer also employs the device of alternating (legato) between the fifth and sixth of a major chord to evoke an expected western sound.

Sheldon produces some stunning lyrical writing. The overlapping seamless phrases combined with generous amounts of imitation work well. When the trumpets play a lyrical line, the horns and high woodwinds imitate this line one measure later. This type of imitation binds the music together and provides unity within the musical score.

The Allegro Giocoso section moves a bit quicker, and it is in a playful hoedown style, with xylophone, and woodblock accenting with regularity. The parts for six percussion players are active throughout the composition.

The beginning motive returns in the high woodwinds (modified), answered by the trumpets one measure later.The third imitation, by the French horns, euphonium, and xylophone is delayed beyond where one would most likely expect it to be. This delay in the third entrance is typical of Bach’s fugues. Delaying the third entrance produces the unexpected and is a wonderful compositional device.

The trumpets and trombones return at Tempo I singing the main motive at a fortissimo level. This section builds to a very exciting, rhythmic climax.

The first French horn is asked to play up to a G above the treble clef, while the trumpet range is comfortable but there is an A above the staff on the final note of the piece. (An optional F is written just beneath the A). The trombones, during the hoe down section, play in unison for thirteen measures, and the tessitura for this section is from F in the staff to G above the staff.

I am pleased to see and hear a score where the French horns are not playing constantly. The warm, luscious sound of the horns should be saved for vibrant unison countermelodies, heroic places in the score, and for backgrounds that are characteristically warm. Overusing the horns for instrumental padding can create a sameness in the sound of the band, in the same way that a constant tutti creates a monotony of intensity. The horn is a color that is to be used carefully and prudently.

A Prairie Portrait is a wonderful, expressive, imaginative piece of music that warrants review by all band directors. The parts lie well under the fingers and the technical writing is very well handled. This musically rich work has variety, a sense of development, and an intensity that makes it a must-have for band directors.