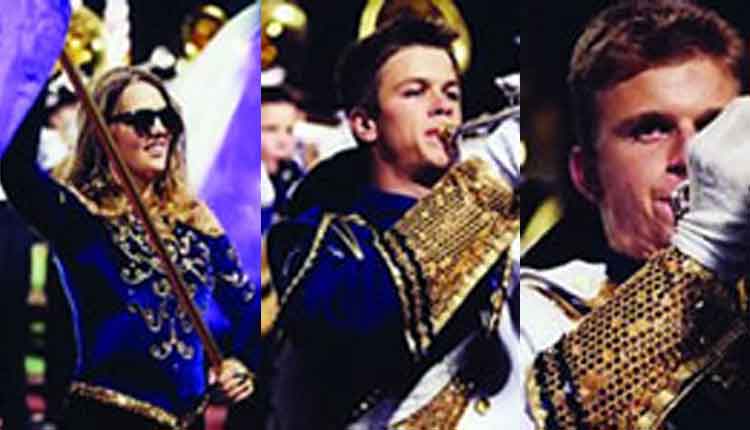 Blue Springs High School Golden Regiment Marching Band was seeing stars in Hollywood this past Thanksgiving. Led by Dr. Tim Allshouse and Gateway Music Festivals & Tours, the 260-member band spent six sunny days touring Los Angeles and performing for over one million spectators in the nationally televised Hollywood Christmas Parade, held annually the Sunday after Thanksgiving. Since 1928, the parade has commenced the holidays featuring bands, floats and nearly 100 celebrities along Hollywood Blvd. In addition, the band performed at Disneyland and the Hollywood Bowl.

The Golden Regiment Marching Band receives national recognition for their powerful sound, innovative drill design, and class act reputation. In 2002, the Golden Regiment had the honor of performing for thousands of spectators in the Waikiki Holiday Parade and a concert at the flag raising ceremony at the USS Arizona Memorial and the USS Missouri Battleship in Pearl Harbor.

Known in Missouri as the “band of the audience,” providing stirring pre-game productions and parade performances, the GR is also fortunate to employ a variety of drum and bugle corps arrangers as well as in-house staff to specially arrange selections for the band.

Over the years, the Golden Regiment has also been honored with numerous half-time performances for the Kansas City Chief’s at Arrowhead Stadium, a recent performance in the TWA Dome in St. Louis, Missouri, as well as appearances at the Rose Bowl Parade, Orange Bowl, the King Kamehameha Parade in Honolulu, Hawaii; Citrus Bowl, and Disney’s New Years Eve Parade at Epoct just to name a few.

Whether performing as the official high school marching band for the Kansas City Chiefs or collecting hundreds of musical toys for “Toys for Tots” each winter, this band is making quite an impression. To learn more about all the Blue Springs High School band programs and their directors, visit www.goldenregiment.org

“The element that makesGateway Music Festivals & Tours rise above the rest is the character of the staff. They always have a sweet, caring demeanor that we all fell in love with immediately.”