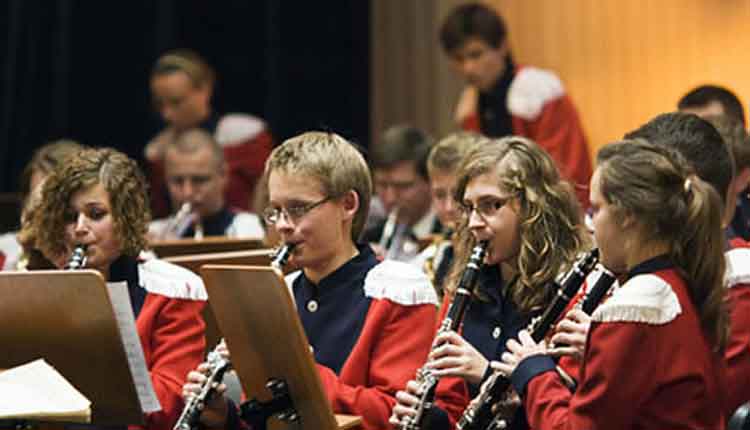 Most of us have been to a middle school band concert where the band excelled but the soloists didn’t. If the band is playing well overall, a few brief solos should not leave the audience wincing.

Band directors who encounter problems with solos may want to consider the following:

In many bands, the first-chair players study privately and automatically get the solos. Stay with that plan if it’s working well, but if the first chairs are reluctant about playing solos, or worse, if nobody in the section wants them, have the entire section rehearse them as solis until a week or two before the concert, then have tryouts and designate solo players. The technique of making all solos open to every player in the section a standard procedure relieves the panic some students experience when the word solo appears in a new piece of music. The thought of competing for a solo shifts the focus from a single player’s fear of embarrassment to a friendly competition, which often makes the process more fun. Individuals are often more confident when the entire section plays the solo along with them during rehearsals. Although the first- or second-chair player may still get the solo by winning the try-out, occasionally a student, who has been hiding in the middle of the flute section will surprise everyone by producing a gorgeous sound and nailing the solo.

The effectiveness of this technique was demonstrated recently during our band’s preparation for the state music conference. After the solo flute try outs, a rather nervous girl who was not first-chair got one of the solos. The process helped her overcome her shyness and she played the part flawlessly on every concert, including the culminating performance. She was beaming after that event, and again when she heard herself on the concert recording.

Offering everyone a chance to shine as a soloist provides added incentive to practice and gives students an opportunity for recognition.

Once the soloists are selected, look for ways to build their confidence. Multiple performances before the concert, including in-class recordings, will improve their solo playing. I advise students to play solos for others as often as possible, including parents, neighbors, siblings, friends, or even pets.

Solo players who struggle in rehearsals need concrete suggestions for improvement. For example, if nerves are causing poor tone and missed notes, remind students about diaphragm breathing or, if they’re tripping over technical passages, have them practice slowly for accuracy, then work for speed later. It sometimes helps students play more solidly when I ask them to project their sound by adding, if you’re going to miss it, miss it big!

Some practice guidelines may include being able to play a solo correctly five times in five attempts or to play it once accurately each time they pick up their instrument.

While some fearless young musicians play solos with ease, many do not. To help diminish stage fright, I point out that solos are not brain surgery and nobody will be injured if something goes wrong. I also mention that even experienced professionals make mistakes sometimes, and life goes on.

Young soloists may benefit from learning stress-reduction techniques, such as deep breathing and physical relaxation, which are routinely employed by public speakers, athletes, and other performers.

I tell students to prepare well, give it your best shot, then forget it to help them relax and keep their playing in perspective while they work toward shining as soloists.

The key to effective band solos starts with the judicious selection of pieces that match the group’s abilities. If a piece calls for an outstanding oboist, but the group’s only player is barely adequate, consider saving the piece for another year. However, other options could include several one-on-one rehearsals with the oboist, doubling the solo with a muted trumpet, or transferring the solo to a different instrument entirely. Most composers would prefer to hear a solo passage in their music doubled or transferred and played well, rather than listen to the struggles of a performer not up to the task of playing it as written.

As directors pursue the ideal band with soloists who perform at the highest levels, the reality is that they’re working with young students who need the director’s help in excelling as soloists.