The Tuning Process – The Ensemble 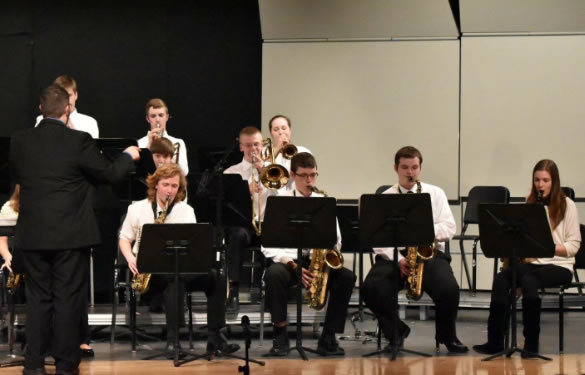 The Tuning Process – The Ensemble
This process is predicated on the concept of tuning from the bottom up. This practice allows all performers to establish their relative pitch on the fundamentals established by the bass instruments. (Note: This pyramid should exist in all sections.)

Second: Have the trombones sustain 4th line F. Add the French horns on their 3rd space C. When this is in focus, change the trombones to Bb and the horns to 1st space F.

Third: Let the trombones and horns sustain concert F. Add the trumpets on their 2nd line G and 3rd space C. Sustain until you have the desired results.

Fourth:_ Sustain the brass choir in perfect fifths. Example: Tubas on low Bb. Trombones on 2nd line Bb, 4th line F and Bb above the staff. Euphoniums on Bb above the staff and high F. French horns on Ist space F and 3rd space C. Trumpets on 2nd line G, 3rd. space C and high G. You may then move these intervals up or down by half steps. (Upper ranges should be used with mature groups only.)

Fifth: Sustain the tuba on low Bb. Set the bassoons, bass clarinet, contrabass clarinet and bari sax on second line concert B b. Low woodwinds should also alternate between their concert B b and concert F . (Note: The bari sax will not have great success on concert F as this is one of the poor notes on the instrument. It might be more productive to have the bari sax move between low and high G, its concert Bb.) Allow the group to arrive at a strong focus insuring a close tie between woodwinds and brass.

Sixth: Have the low woodwinds sustain concert Bb. Add the tenor sax shifting from middle C to upper and lower G. Now introduce the alto sax on their octave G’s. Sustain until focus is strong.

Seventh: Sustain the alto sax and tenor sax on concert Bb. Insert the clarinets moving back and forth between their 2nd line G, middle C and G above the staff. Again make sure you have a stable bond before moving on.

Eighth: Sustain the clarinets on their 2nd line G and 3rd space C. Now add the oboe on F and Bb. The movement should be from 3rd line Bb to low F back to Bb and up to top line F. (Note: Neither of these notes are particularly focused or even useful as a tuning device on oboe. It does, however, allow the performer to adjust to the surroundings.)

Ninth: Sustain the clarinets and oboes on concert F and Bb. Add the flutes on their top line F and Bb above the staff. (Note: As the flutes tend to tune sharp on an isolated note, have them ascend by steps from F to Bb until the Bb has a strong center.

Tenth: Repeat the process in step four, only now with the woodwinds. Example: Bassoons on low Bb and or middle Bb and F. Bass clarinets on low C and or middle G. Bari sax on low G. Tenor sax on 3rd space C and or 2nd line G. Alto sax on low or high G. Clarinets on 2nd line G, middle C and G above the staff. Oboes on Bb and flutes on Bb above the staff. Move these open intervals up or down by half steps.

Finally: Use the entire ensemble moving the open intervals up and down in half steps. You may wish to have the different families play independently allowing you to key in on the pitch cohesion between the groups. (Note: The quality of sound, balance and blend are crucial for the successful achievement of excellent intonation.)