Practical Ideas for Developing a Warmer Sound in Young Bands 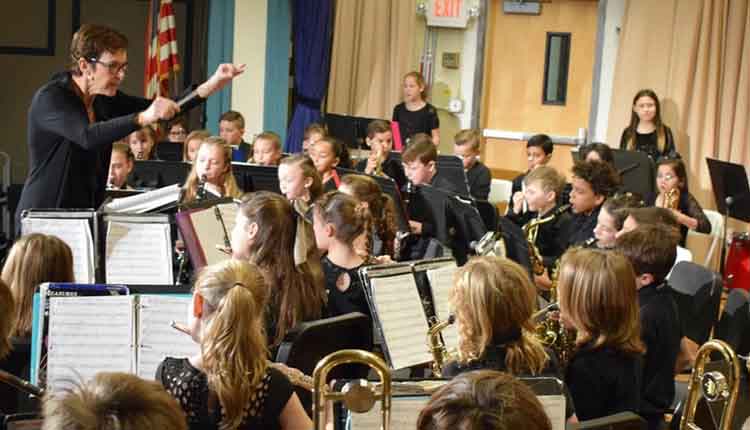 When you listen to your performance recordings, do you hear a band that plays accurately but with an ensemble tone you don’t like? Do adjudicators’ comments indicate that your band sound could use some improvement? Perhaps you need to work to change the tone of your young band, possibly from bright and shrill to a darker, more mature sound. Consider doing some long and short term things to change your group’s tone quality.

First, examine the distribution of instrument voices in your band. Do you have an overbalance of middle and high voices, as many middle school bands do? If you have no tubas, or need more than the one you have, start there. Within the band, one place to find tuba players is in your brass sections, but some directors have had equally good luck making tuba recruitment such a big thing that mid-section flute, clarinet, and sax players have switched to tuba or added it as a secondary instrument. One of my best tuba players ever was a petite girl who found lots of satisfaction occupying a pivotal position as first chair tuba instead of being the seventh of eighteen clarinets.

To complement your tubas, further low sound can be obtained through the development of baritone saxophone and bass clarinets. Some fine sounding middle school bands utilize three or four tubas, five bass clarinets, and a baritone sax to balance sixty to seventy piece bands. When they’ve available, adding baritone horn and bass trombone players can also boost your bottom sound. As a stop-gap measure, some directors utilize a bass guitar but this practice shouldn’t be the long-term solution.

If you have a feeder program that’s failing to supply these vital low instrument players, the burden falls on you to find some way to provide them for your band. Rather than being fringe luxuries, think of tubas and as many other low instrument players as you can develop as absolutely critical to your band’s success.

“Balance Down” for a Darker Sound

In many bands, the strongest, loudest, most dominant players are the top chair flute, clarinet, saxophone, percussion, and trumpet players. It’s important to encourage their enthusiasm but also teach them to adjust their volumes to match other sections. For example, you can help them understand that the markings forte and fortissimo don’t just mean “loud” and “louder” in ensemble play, but more accurately mean play at a full volume that matches other sections. Help them listen to see if the trumpet forte matches that of the French horns and bass clarinets, or see if the percussion fortissimo balances that of the flutes. Bringing some of your higher range instruments into balance with lower voices is an important step in warming your band’s sound. Just as many bands tune by starting with the tubas and progressing upward to the flutes and clarinets, you can use the same technique to help your band learn to balance tonally and dynamically to the low register sounds. We’ve all had or heard small school bands of 25 or 30 members that had one bass clarinet or a baritone sax for bass sound. Using the instrumentation available, those bands had the potential to produce an effective concert band sound only if other members of the band knew to constantly balance down to their bass instruments.

Young players can be taught something that mature musicians understand well, that there are different sounds for different kinds of groups. Help your young players understand that, for a large concert ensemble to blend its many individual sounds together, all band members-woodwinds, brass, and percussion-need to play with a sound that can blend. The more players you have who over blow or produce strident, shrill, or very bright sounds, the harder it will be to get a pleasing blend with your concert band.

A good starting place may be to point out that the aggressive, forceful playing that may work well for a lead alto or trumpet in jazz band, may be detrimental in the concert band, or the drummer whose powerful playing is well suited to marching band or jazz band my be overpowering in a symphonic ensemble. As you ask upper register players to back off a bit, work to get your middle and low voice instruments to play stronger. If your budding tubists are timid, do things to draw them out. Praise, tease, bribe, demand, or whatever works, to get the strong bottom sound your band needs.

In some cases, you may need to suggest other changes in approach when your students begin to be serious about concert band playing. Drummers may need to make a conscious effort to lighten up their touch from what they’ve been doing in other ensembles. Brass players can soften their embouchures and produce tones with greater ease and less force. Wind players who start every note with an accent in order to overcome tight embouchures need to loosen up a bit. One approach is to have brass players imagine that there’s a pin head inside their mouthpieces and they’re trying to reach in and grasp it with the inner parts of their lips. This movement helps relax an “exaggerated smile,” tight embouchure, and it produces a brass sound with a softer edge. Emphasize to all wind players that any tension in their playing should be directed toward supplying lots of air from their diaphragms and maintaining support around the sound production point of contact between mouthpiece and embouchure, all without biting down on reeds or over tightening lips and jaws.

As part of your band’s daily warm up, have wind players practice taking deep breaths, then producing initial attacks without strong accents. Help them practice using full air flow with relaxed embouchures and see if the ensemble sound doesn’t improve, then work to maintain the tone quality as the band executes music with extremes of range, dynamics, and temp.

If you haven’t tried them already, try addressing instrumentation, balancing down, and developing a distinctive concert band sound, and see if the band’s concert band tone changes for the better. The payoff will be an amazingly mature sound with your young band, rave review from parents, and higher festival scores. Good luck.