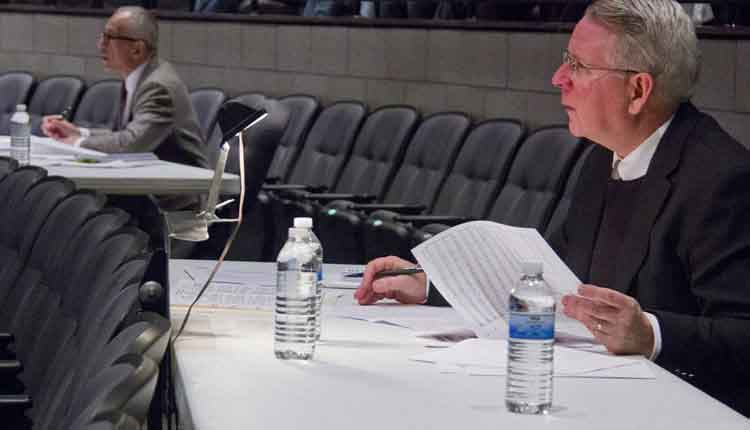 For those of us who’ve had others judge our bands or have had the opportunity to be judges ourselves, there may have been occasions when we’ve had experiences with evaluators that left us baffled, confused, or infuriated. While this light-hearted look at a small group of less-than-effective adjudicators may help keep results of band festivals in perspective, it is not intended to lessen respect for the dedicated musicians who capably serve our profession as adjudicators across the country.

Since it’s so difficult for middle school kids to sit still through the playing of all the judges’ comment tapes from a festival, I began the practice several years ago of playing one tape in its entirety, then transcribing the positive comments from all of them and running off copies for my students. The students get lots of encouragement from the group comments and I also insert names in parentheses when appropriate, so “nice oboe solo” becomes “nice oboe solo” (Danny Smith). The transcriptions have been a valuable tool for giving parents, administrators, and other staff members a glimpse of what we’re doing when we go to a band contest. One of the unexpected outcomes of the transcription process has been the opportunity to do some comparison and evaluation of the work of different adjudicators. After hearing the same performance, one evaluator would have provided a page or more of single-spaced positive comments, another as little as a few phrases. How often can an educator/musician listen to a band’s entire concert festival program and only find a couple of positive things to say?

Now, let’s enjoy revisiting some of the characters we’ve encountered while experience the excitement and drama of band contests.

The Lecturer, who could also be called “God’s Gift to Band”, habitually misses large portions of your performance as he or she launches into an explanation of his pet theory or technique for teaching some performance skill. While he rambles through a windy discourse on “How I always do it”, you and your band are onstage playing your hearts our, largely ignored during the lecture. Regardless of whether your final rating was high or low, you probably wished this person had shown respect for you and your ensemble by talking less and listening more. Typical of the Lecturer are monologues beginning with, “When I perform this piece, I always do it this way”, “The way this piece should really be played is…”, and so on. Very brief comments during the performance with longer comments afterward are usually more useful and appreciated by directors and their bands.

Perhaps you’ve also met the judge who can’t seem to master the art of turning on the tape recorder and adjusting the volume, his and the machine’s, so you have a chance of getting coherent, easily understood comments. This may also have been the judge who was perpetually lost in the score, partly because he or she was searching in March in F while you played Triptych No. 8.

On one occasion, I had inserted some of the original parts omitted when the arranger wrote his simplified version of the Pachelbel Canon. Instead of using Pachelbel’s Canon, as the arranger had, I reverted back to the original score and titled my computer-generated parts, Canon in D. This judge missed the entire performance of the piece while he flipped pages of the score and the add-on sheets, mumbling about “some of these pages belonging to a different piece”. Confusion and ambivalence continued to characterize him as he mumbled muddy generalities when he did manage to find his place in the scores.

Faced with the Fumbler, Bumbler, Mumbler, you may find yourself wishing he or she would look over the scores while your band sets up, instead of socializing with the other judges, listen to the announcer to make sure he has the correct order, and try to have himself mentally poised to do the job he was contracted to do.

One of the most common evaluator characters listens to every ensemble and every musical selection through the filter of a single technique. He or she ignores much of the good and bad about the performance while focusing on a single facet, like dynamic contrast or intonation or style. If you were to take this person’s comments at face value, you might leave the festival thinking your band had done everything perfectly except for accents and crescendos, when a more accurate assessment would be that you had strengths and weaknesses in a much wider range of specific performance facets. I’ve observed this kind of judge in a performance/clinic format overemphasize dynamic contrast to the point that, if you followed his or her suggestions completely, you’d soon have a young band overblowing badly and distorting tones in an effort to replicate the volume level in fortissimo and sforzando execution that would be more typical of high school or college bands.

Sounding like a broken record, the Nag maintains an almost constant running advisory to “watch out for those a-flats”, “be careful about the accidentals, the crescendos, the key changes”, and on and on, ad infinitum. Is this individual thinking your group will adjust in mid-performance and execute a key change better because an adjudicator they can’t hear is reminding them of it? Or is there a subconscious wish to cover one’s bases by pointing out score markings as they appear, then being able to add the comments later, like, “See there, you have all those staccatos I’ve been talking about and not all of you are doing them?” Or, does this judge feel the need for constant commentary, not realizing that it really is acceptable, even preferable, for him or her to spend long periods of time listening to the performance in progress, then making comments later?

The Assassin lies in ambush, silently withholding comments during the good parts of a band’s performance, waiting until something doesn’t go well, then he or she pounces. A typical opening comment for this kind of judge, often delivered some distance into the concert program, begins, “Okay, now you’re starting to have some trouble with these running sixteenth notes. This just isn’t very well played and this piece may be too hard for this band,” and so on. It’s almost as if this evaluator is implying, “I didn’t really think this band was all that great and now you’ve proved me right”.

Some judges seem to be overmatched by the group or the literature they’re trying to evaluate. Faced with an outstanding performance of complex music or literature of the Baroque or Classical Periods where they may not have much experience or competence, some band judges seem to have difficulty addressing the salient technical and stylistic facets of the performance but, feeling the need to comment about something, resort to near meaningless suggestions that the accents could have been a little stronger, or the slow section could have been a little slower or a little faster, and so on.

Unless adjudicators are clear about what significant portions of the band’s performance need improvement, why not just commend the band on a great performance of fine music? Period.

Positives: What the Effective Judges Do So Well

In contrast to the few ineffectual adjudicators are the vast majority, musicians who listen respectfully, then offer clear, usably suggestions that relate directly to your band’s performance. These individuals are masterful at finding things they can praise even as they give the constructive criticism that will assist in improving our groups.

Positive evaluators can come across not as hostile combatants but as friends of the director and his or her band. They seem to operate under the assumption that teachers and students deserve the respect and encouragement for participating, even if they didn’t have a particularly good day at festival. Positive judges have become experts at identifying not just the problems but also their causes. Instead of delivering flippant barbs, like “You should listen to recordings to learn what bands really sound like”, they might emphasize to young players that they need to over-prepare so they can sound good, not just in their home practice room or school band room, but when they’re under the stress of live performance and “the bright lights come on”.

As districts and individual schools undergo changes dictated by high stakes testing, many teachers find themselves having to work in conditions that are far from ideal. Highly skilled adjudicators are sensitive to variant situations and, while they offer the same criticisms when warranted, they couch them in terms that indicate their awareness of forces at work. In one series of spring festivals, one of my bands played the same pieces for two different panels of judges. When attacks and releases fell below desired standards, one judge/clinician thought the way to help the group improve was to go into a lengthy story about some group he’d heard that had the most perfect attacks ever. In a subsequent festival, the judge/clinician began his work with the band by asking how many different classes represented on stage (four) and how often they’d rehearsed together (six times, before school). Though the criticisms were both accurate, the second judge was much more helpful because, instead of assuming that the teacher and students just didn’t know how to attack and release, he focused on the root cause of the problem and what would need to be fixed if any improvement was to take place.

Certainly, as important as the statements of positive affirmation, is the underlying attitude found in all fine evaluators that they value and respect the appearance of each band at the festival. Each teacher and each ensemble can leave the festival with clear, fair, accurate assessments of their strengths and weaknesses, offered by a panel of judges who were respectful, positive, and supportive. Even if the results were not all that the directors had hoped for, they and their bands are likely to try harder and return next year if they can honestly feel that their participation this year was a positive learning experience for all involved.

When you’ve been judged, what kinds of affirming phrases and comments were most helpful? If you’ve been a judge, how many positive comments did you provide along with your constructive criticisms?

Way to go!
Super Job!
Outstanding
I really appreciate that
Good for you!
You should be proud of yourselves
Great teaching and learning
I can tell you like to play
I like what you did right there
You really captured that piece
Beautiful!
Wow!
Keep up the great playing
Great job!
Yea!
All right!
Very, very nice
Nice attention to detail
Well prepared band
Nice looking band

It must be fun playing in a band this good