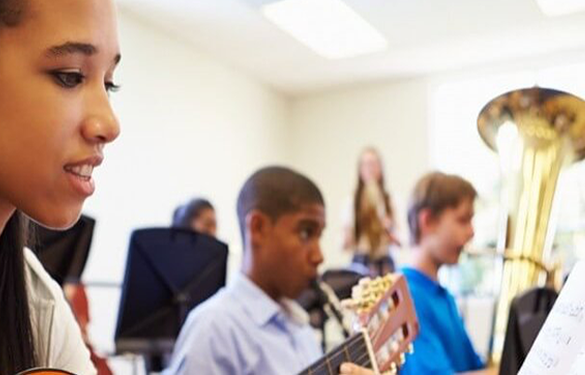 Despite its potentially high cost, there may be more benefits to music education than meets the eye, including from a social, cognitive and educational standpoint.

Past research suggest that students who take music in middle school score significantly higher on algebra assignments in ninth grade than their non-music counterparts, according to research compiled by the National Association of Music Merchants Foundation.

The US non-profit added that in the past, secondary students who participated in a music group at school reported the lowest lifetime and current use of all substances (tobacco, alcohol, and illicit drugs).

According to the The Hechinger Report, schools serving low-income students are less likely to have music offered at their school than those in wealthier communities.

Despite that, some schools are finding ways to ensure students enjoy the magic that is music.

For instance, Andrew Campo, band director at at Montezuma-Cortez Middle School in Cortez, Colorado, told Education Dive that students at his school are asked to pay US$40 a year to participate in band, which is available to all grades.

However, children who can’t afford the fee are never turned away. Campo reaches out to the community for donations of instruments and cash, which has allowed the school to procure flutes, clarinets, trumpets and saxophone.

Research suggests there are many benefits of exposing students to music education. Source: Shutterstock

The music programme is celebrating its 10th year of partnership with the Juneau School District. In that time, the programme has developed students with higher-than-average scores in math and English, claimed JAMM executive director Meghan Johnson and JAMM programme director Lorrie Heagy.

“The research behind it is if you have at least two years of an instrumental background, it not only prepares the brain to be successful for academic success but to be a contributing citizen in your community,” Heagy was quoted saying.

The Hechinger Report notes that there are more schools across the US offering music today than there were 20 years ago; more of those schools employ full-time music teachers.

The positive trend is the result of a policy push based on two major surveys by the US Department of Education in 1999-2000 and 2016.

The report added that the uptick in schools offering music classes since 2000 is in keeping with a longer, 50-year trend.

Quoting data from the National Center for Education Statistics, it said the percentage of secondary school teachers who specialise in art or music instruction grew from 6.7 percent in 1966 to 8.5 percent in 2015-16, outpaced only by special education.

Liked this? Then you’ll love…

Heightening the connection of music education in schools

Grover Pro Percussion Quick Tip Where Should I Strike A Triangle